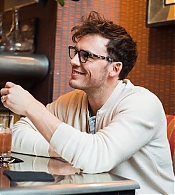 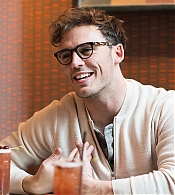 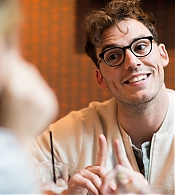 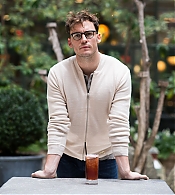 It’s a certain type of character who can be found lunching at New York City’s The Crosby Street Hotel’s Crosby Bar at 2 p.m. on a weekday. But, if you survey the scene closely enough on this slightly overcast November Wednesday, you’ll notice that tucked among the dilettantes, ladies who lunch, and rosé-sniffing aesthetes, is a bonafide movie star. Luckily for Sam Claflin, who reprises his role as bronzed Merman Finnick Odair in today’s fourth and final installment of the ​Hunger Games​ saga, ​Mockingjay – Part 2​, everyone is either too engrossed in their own conversations or too cool to harass the foppish Brit twirling his rum cocktail in the corner. Though the 29-year-old actor certainly commands attention—​after all, this is the guy who can make eating a sugar cube look like lascivious foreplay—​there’s also something charmingly unassuming about him. And to hear Claflin gush about his wife, ​Da Vinci’s Demons​ actress Laura Haddock, is to know exactly what this guy is all about. So when he’s not partying with Brad and Angie (seriously), rest assured that this family man is at home with his leading lady and their beloved Cockapoo, Rosie, painstakingly creating Iggy Azalea karaoke videos. Does he contradict himself? Very well then. ​

There’s a pivotal scene in ​Mockingjay – Part 2 in which you take down a pack of grotesque CGI mutts. All my colleague Sally could talk about was how ripped your back muscles looked…

Oh no! That’s the only moment that I didn’t actually do [laughs]. That was the one stunt of the entire movie. Anyway, by the time we got to the fight sequence I was exhausted and tired and cold and hungry and no one had spoken to each other for like three weeks because we were all so miserable.

The really difficult thing was that everyone else got machine guns and all I had was a trident! There were so many moments in the script up to that point where I didn’t actually get to do anything. I was just sort of standing behind everyone else looking after Josh [Hutcherson]’s character. When we actually got around to getting into the sewers, and doing the close combat kind of stuff, I got to play around a little bit more.

Once again you are caught snacking in this movie. You know people are still obsessed with how you ate that sugar cube…

Well, you do pop it in kind of gingerly…

Yeah [laughs], I sort of suck it in. I was trying to make it as lewd and sexual as possible. Cheers!

I wish I could drink this, but I am pregnant. I know your wife is also expecting her first child. I have to say, men have it much better off in this scenario…

I’ve been reading this book that I think a lot of people who are about to be parents read called Fatherhood. Basically what this book is trying to say is that, from this experience, you will walk away feeling like you have really grown an appreciation for the female form and the female gender in general. I really have a newfound appreciation. Not that I didn’t have one before, but I feel like I’ve grown as a man a little bit. I’ve never been more in love with my wife than this moment.

You guys are very cute. I loved your Dubsmash duet of Iggy Azalea’s “Fancy.”

See, that wasn’t even a Dubsmash. It was just a random video that I did. One of my friends jokingly sent me a video of him and his girlfriend doing it in a car, but with just one line. I thought, ‘I’m going to outdo them. I’m going to do the whole verse.’ So I started doing it alone, but I didn’t really know the lines. It took me a good 150 takes before I got decent at it. Just as I started getting there, Laura walked in. So I was like, ‘I’ve got to get you in now!’ But then it took us another hundred takes to get the timing of her coming out and the positions right. That maybe took three or four hours.

You must really love Iggy.

She gets a lot of shit.

I don’t know about that. I sort of don’t read that shit. That’s an element of this industry I really can’t stand.

What happens to me is, you know, I play Finnick in the film and someone will go, ‘Oh my god. He’s so ugly. He’s too ugly to play Finnick.’ But at the same time I never thought I was good-looking enough to play Finnick. It’s not like I’m running around with a sign on my face going, ‘I’m the most beautiful human being and I should be the Sexiest Man Alive.’ I don’t think that about myself, so I don’t need other people to tell me that.

What’s actually been incredible about The Hunger Games is the full 360 that people seem to have done…The moment Catching Fire came out there was a lot of positive feedback. It’s grown to such a point now that when I go to premieres and screenings and meet fans on the street they’re always like, ‘You’re the best Finnick.’ I’m like, ‘But I’m also the worst Finnick…because I’m the only Finnick.’

So I’ve seen another, probably lesser-seen, movie of yours, The Riot Club. That night gets absurdly out of hand. What was the best party you’ve ever been to?

That’s a very good question. Actually I’d say, I don’t know how much I can talk about it, but Josh [Hutcherson] had, like, an after party at his house the other night after the L.A. premiere and that was pretty awesome. Pretty bumpin’. But I’d say it would have to be one of my first-ever party experiences in L.A. My agent invited me to his house, where he was hosting a party. I arrived and there was Gerard Butler at the door and he’s like, ‘Hey mate.’ I walked in and saw Sean Penn, Brad Pitt, and Angelina Jolie. You know Entourage?

So [Adrien Grenier’s character, Vincent Chase] goes through all of those experiences, but with his best friends. Well, I was doing it all on my own, basically, taking mental photographs. One of the craziest craziest weekends I’ve ever experienced. I’ve also been to one of Madonna’s house parties.

Yeah, I don’t even…You just can’t compute things like that. I was pretty far gone by the time I got there so I don’t remember many details. I should have stolen some toilet paper. It was after a big event, like the Oscars or something, so again, everyone’s there and everyone’s loose. I remember spilling a whole glass of red wine down somebody. There was an epic selfie of me, Lily Collins, Selena Gomez, and Vanessa Hudgens at some point.

Well, I was about to work with Lily Collins, so she kind of looked after me I suppose. I was there with my agent and Jared Leto, who was sort of hanging out with us. It was really bizarre.

If you saw Jared Leto the next week, would he be like, ‘Oh, hey man. From the party!’

I would like to think that he would! [Laughs] Honestly, we spent a long time together, but you just don’t know. I mean, everyone, especially me, was so drunk.

So, one last thing: I love your hair. What’s going on here? You look like a mad scientist. I’m getting, like, a young Jude Law right now…

Funny enough, for years he was my sort of hero in terms of his fashion and a lot of the jobs that he did—especially when he was younger.

I don’t, but thank you. I like to look kind of effortless…even though effort goes into looking effortless.