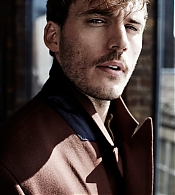 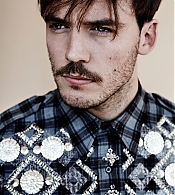 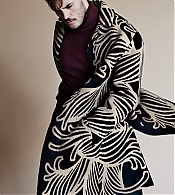 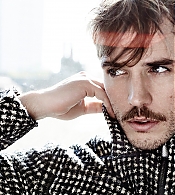 Actors like to talk about their years in the wilderness before fame hit. Harrison Ford was a carpenter. Jon Hamm spent decades waiting tables. Channing Tatum stripped. It gives them some regular-Joe mass to weigh against their new celebrity. Sam Claflin, 29, star of The Hunger Games and Pirates of the Caribbean, is no different.

“Everyone has their struggles, I think. After I left drama school I had six months of rejection after rejection,” he says, sipping on a pint in Kentish Town, north London, in unseasonable autumn sunshine. “I thought about a plan B.”

Wait a second… Six months? Six months isn’t a period in the wilderness. In acting terms that is a mere long weekend of unemployment. After which Claflin was cast in Pirates of the Caribbean, Snow White and the Huntsman, then The Hunger Games and The Riot Club, the film version of the play Posh, a fictionalised version of the Bullingdon Club. This was in addition to TV roles in Any Human Heart and The Pillars of the Earth. By any actor’s standards, hardly a rocky road.

Still, it’s easy to understand where he’s coming from. The speed of Claflin’s ascent to matinée idol, courtesy of two of the biggest franchises of the 21st century, would embarrass any normal bloke. And apart from his career, everything about Claflin screams normal bloke. He is friendly and self-effacing, handsome and articulate. He complains about the trousers he’s wearing for our shoot being too tight for his “footballer thighs”. He was a promising junior player growing up in Norwich (you can still hear a faint Norfolk lilt in his vowels). There’s a swallow tattoo on his bicep that he got for his 28th birthday and only after years of planning. He lives in Chiswick, west London, with his wife, fellow actor Laura Haddock, because he’s “not cool enough for east London”.

Claflin says the trousers he’s wearing for our shoot are too tight for his ‘footballer thighs’
He certainly seems more at home outside a grim Kentish Town pub than he was being fussed over by make-up artists in the hot studio. Does he even enjoy the fashion shoots? “I fucking hate them! Well, no…” he adds, perhaps mindful of his PR obligations, “I just can’t understand why people would wear any of those things. But I’ve learned to enjoy myself on the day.”

We’re meeting because the fourth and final film in the Hunger Games franchise – based on the dystopian novels of Suzanne Collins – is about to land in cinemas. The films have so far grossed $2.3bn and helped to make the lead, Jennifer Lawrence, one of the most famous people on earth. A host of other cast, Claflin included, have become A-list rising stars, with huge and devoted fan-bases, mainly of screaming teenage girls. As with that other great 21st-century franchise The Lord of the Rings, the filming took a long time and served as a kind of second childhood for its cast and crew. They shot the final two films, Mockingjay parts 1 and 2, together. Filming finished in spring 2014.

I suggest that it must be strange promoting something from so long ago. “Yeah, we had a refresher screening the other day, which was helpful. Before that I couldn’t really remember who I played or what I said,” he jokes. “But I think it’s a great climax to the series. It feels like the end of an era. I was sad to see it end, but also happy.”

A franchise of that scale holds plenty of contradictions for those involved. Although the production cost hundreds of millions of dollars, Claflin says that filming felt intimate. “It was a bit like being on holiday with your friends. A lot of the time I was just running around Hawaii with Jen and Josh [Hutcherson] and Lynn Cohen.” But any cosiness was interrupted by the sudden death of his co-star, Philip Seymour Hoffman, who was found in his New York apartment in February last year, mid-filming.

“I probably shouldn’t talk about it much,” says Claflin. “But it hit us all very hard. It was very unexpected, very sad. He was not only a hero to millions, but a personal hero of mine. The way he did something with every role. It’s so upsetting that you’ll never see him in a new film.” I suggest that Hoffman found the pressures of stardom hard to cope with. Does Claflin empathise?

“I’ve definitely experienced the loneliness of the job. During the first Hunger Games we were out in Atlanta for six months. I was in a hotel, and all I had for company was a box set of Friends. In a way it was helpful that I had to be in such good shape: for months my routine went gym-chicken-bed-gym-chicken-bed-work, repeat.”

Ah yes, the torso. His character in The Hunger Games, Finnick Odair, spends plenty of time with his top off as he fights for survival with his fellow teenage revolutionaries in the oppressed districts of Panem. Claflin says it’s not something that comes naturally to him. “You read the books and my character’s meant to look like a kind of Greek god. I wouldn’t have cast me: a pale, English, overweight, stubbled kid. I like a beer and a burger. I got nominated for a ‘Best topless scene’ against Zac Efron. I mean, how am I going to compete with Zac Efron?”

While women have it bad, he points out that men are objectified, too. “Have you seen Loose Women? It’s just women looking at pictures of men going: ‘He’s sexy… He’s sexy… He’s sexy.’ If there was a programme like that about women, there would be an outcry.”

Another by-product of The Hunger Games is that Claflin has seen close up the effects of fame on Jennifer Lawrence, whose private naked photographs were distributed on the internet last August. “Jen, bless her, puts up with a lot. It’s frightening to see that kind of thing, the idea that you can’t have a private life. I keep a Twitter and Instagram page because I don’t want to invite people into my world too much. It’s my way of letting the fans think they are seeing my real life, but in reality I’m pushing them away.”

But there’s no doubt that maintaining a social- media profile is part of the modern actor’s lot. “A lot of my followers are at an age where they aren’t able to drink or get tattoos or anything, and there’s a duty to them that lots of people don’t pay attention to. For example I’m going to a mate’s house tonight, but I’m not going to tweet pictures of myself drunk. The music industry is so messed up – look at someone like Miley Cyrus, who is just sex and drugs. The thought that one day my kid might look up to someone like that is…” he trails off and shakes his head.

Claflin’s is a peculiar kind of reputation. His presence would provoke a riot in most American high schools, but nobody in the pub would recognise him. Still, he is trying to slough off the shackles of hunkdom. “I hate being offered heart-throb after heart-throb,” he says, only half-joking. “It is something that stresses me out about the industry that because you’ve done one part you can’t do any others – you want to say: ‘I act, you know. I can pretend.’

“You get overlooked because of the way you talk or look. Because I did The Riot Club I’m offered a lot of posh roles, and people won’t cast me as taxi driver number 3. But my upbringing was the polar opposite of the guys in that film. I’m not very well educated. Douglas Booth and I went to Eton College for the day with the director, because we were the only two cast members who hadn’t been to private school. It was a real insight into a world that I hadn’t known existed.”

Still, he says that he relished the chance to play someone different. Earlier this summer he filmed Me Before You with Game of Thrones star Emilia Clarke, in which he played a paralysed wheelchair user. “It was tough; a real eye opener. But it’s like The Riot Club – whatever happens, I’ll know I learned a lot doing it.” Next up is Their Finest Hour and a Half, a film with Gemma Arterton about scriptwriters during the Second World War, for which he has grown a suitably 1940s-style moustache. After that, he doesn’t know.

“There isn’t really a plan. I’m still wondering what am I going to do when people realise I can’t act.”